A Mercy Pilgrim Travels Back

My good friend Eamonn Guy drove me to Swinford. When my family left that evening I saw my mother wiping away a tear as Eamonn drove out the Convent gate. I slept very little the first night. I looked around my cell (bedroom) from every angle. What I saw were plain white walls, a crucifix over the bed, a jug and basin and a small press. Religious life those days was not easy. We arose at 6 a.m. to the light of a candle. We called the others Sisters Mercy Sisters – Receptions and Professions on our turns. The mornings we gave the call we were up at 5.30 am. Our morning honorium was morning prayer and meditation at 6.30 am; Mass at 7.30 am; breakfast at 8 am and then each Sister had some house chore to complete. Cells were cleaned and beds made up before going to the school, the hospital or whatever the daily task was. In those days it was called a ‘ministry’. and it was just a job to be done. We were expected to put the stamp of perfection on everything. Dinner was at 12.30 p.m; tea at 4 p.m; recreation from 4.30 – 5.15 p.m; evening prayer (the office) at 6 p.m. study and spiritual reading at 6.30 p.m; supper at 7 p.m; recreation at 8 p.m. night prayer at 9 p.m; lights out and silence at 10 p.m. According to the standards of the day the food was good and wholesome. 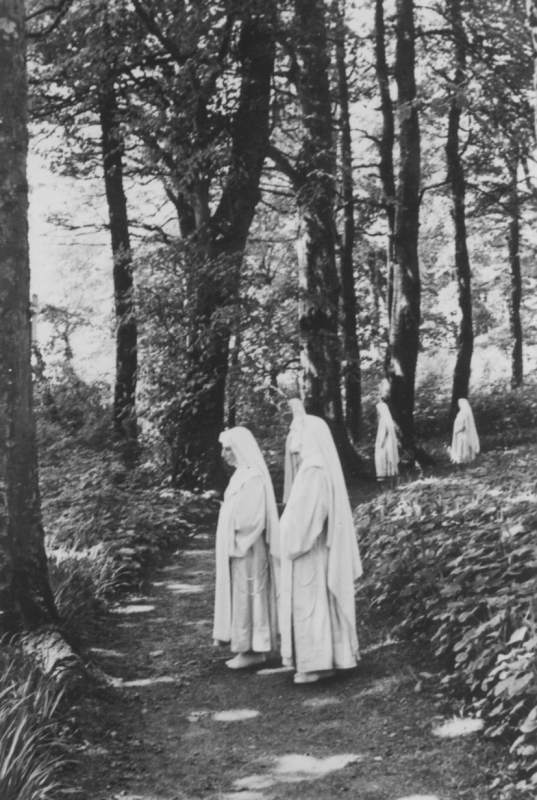 After six months I received the habit of the Sisters of Mercy. We became Brides of Christ at a ceremony called ‘Reception’. We dressed like brides, all in white satin and silk, complete with trail. Our families were invited to the ceremony. My mother nearly did not make it due to floods on the road near Kylemore. We wore a white veil for two years. At ‘Reception’ we got a new name. I was called Sister Mary Consilio. Two years after ‘Reception’ we had what was called ‘First Profession’. At ‘First Profession’ we took temporary vows of poverty, chastity and obedience.
After three years we were finally professed when we took vows for life.

Looking back on our honorium, the time we all should have enjoyed were the two periods of recreation, but we dreaded those periods. We were expected to make ‘small talk’, not to gossip and not to converse on any topics relating to the outside world. It was a great blessing when someone played the piano and we had a sing-song. If we were observed talking to the same person too often or frequently sitting beside the same person at recreation we were in trouble. This would be seen as a ‘particular friendship’ and such friendships were one of the major pitfalls of religious life. All our meals were eaten in silence except on special feast days.

We were always judged on our standards of work. If we were seen to be good workers, get good results in school, polish, shine and dust well, we were labelled as a ‘good nun’. There was little sympathy for the weakling or the one in poor health. It was a lonely life. Today we hear so much about relationships. Sound friends and healthy relationships are the ‘in thing’ today, especially in religious life and the priesthood. As young Sisters we had no shoulder to cry on, no sympathetic listening ear, and no warm arms to give us a hug. We were expected to get all our consolation in the presence of the Blessed Sacrament. Having said that, we kept each other sane. We laughed and giggled at nothing; a strong sense of humour was our safety valve. Common sense told us that half the rules were crazy. Some found the rule of silence very difficult. Others valued it as an escape.