The live commentator’s lot can be a lonely one at times, and in this regard I’ve always hugely appreciated the company and support of an analyst.  Over the years I worked with various local GAA gurus and marvelled at their intuitive knowledge and understanding of Gaelic games.  Their presence takes the pressure off me somewhat and affords my voice a much needed break, particularly after a prolonged passage of exciting or dramatic action.  In my opinion, the essence of a good analyst is to be brief, honest and forthright when necessary.  There’s no point engaging the services of somebody who shirks his or her responsibility re the latter.  Of course, it’s also imperative for the analyst to affirm and positively acknowledge players at the appropriate times.  Above all else, the analyst needs to be fair and balanced re both teams.  I usually contribute my own analysis during the course of our live discussions and sometimes it doesn’t go down too well.  I’ve had players not speak to me on a Monday or a Tuesday because I was critical of their performance on a Sunday and I’ve also been confronted by parents who felt I was too harsh on their sons.  All I can say in my defence is that I consider myself to be very balanced in my evaluation of player performance levels and I’ve never criticised any players for personal reasons.  To the best of my knowledge, I’ve never had any issues with any of the local male or female Gaelic footballers, and even if I had, I would never have allowed such a scenario to influence my thinking or cloud my judgement.  In fairness, I think that the vast majority of listeners accept and appreciate that I’m commentating on these matters in an unbiased and spontaneous manner, to the best of my ability. 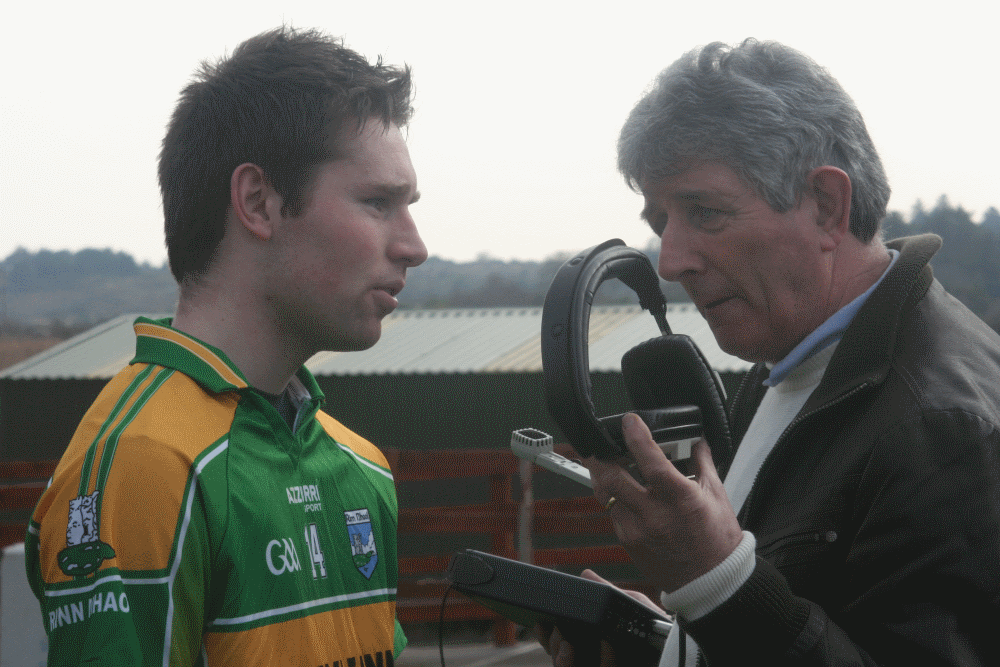 My two favourite GAA analysts were undoubtedly CCRs version of the “Terrible Twins”, namely Mary Canning and Francie Foley.  Mary had remarkable insight into GAA affairs.  She studied every magazine and newspaper that she could get her hands on and she took her role on “Injury Time” so seriously.  Francie brought the light heartedness into it, although I have to say, he’s as sharp as a razor, in his summations.  He assumed the role of the jester and it worked beautifully.  I have to say, that it was an absolute treat for me to interview them because, as well as possessing great acumen and knowledge, they had a special chemistry on air, so much so, that the schedule was often thrown out the window in order to accommodate them.  Mary is a huge loss to the world of GAA because she was a complete one off, a woman ahead of her time who would probably have represented her county if she had been afforded the same opportunities in Peil na mBan as the women of today.  She is sorely missed by those of us fortunate to have spent time with her, and I can honestly say without fear or favour, “Ni bheidh a leithead ann arís.”

Remembered by Brendan Ridge and written by Paul Gannon.

Brendan Ridge is a permanent resident of the townland of Addergoole, in the Parish of Letterfrack-Ballinakill