It has taken ten long years, but the upwardly mobile footballers from the parish of Letterfrack/Ballinakill are finally where they’ve always wanted to be, namely, sixty minutes away from the holy grail of intermediate football.  On Sunday, October 21st last, in front of a huge crowd of passionate and vociferous supporters on both sides, the West Connemara lads delivered their best performance of the year to finally lay the island bogey to rest and deservedly set up a county final showdown with the North Board champions later on this month. 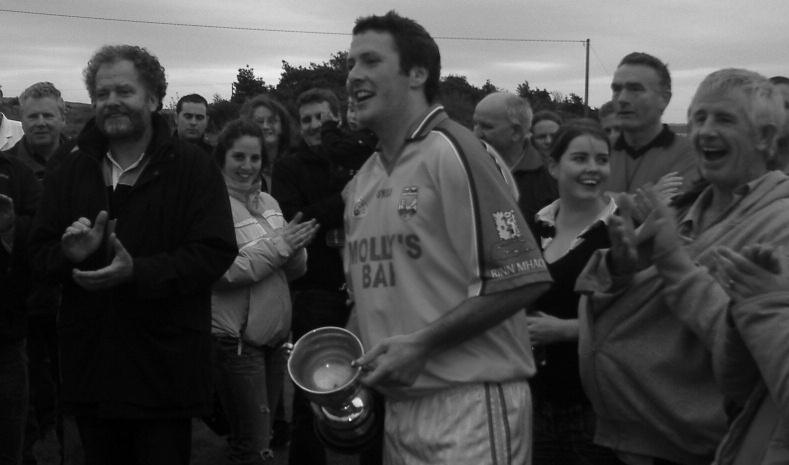 Renvyle Captain Stephen Heanue delivers the post match oration after his side had qualified for a County Junior A
League Final showdown with Annaghdown in 2007.

Aran had the better of the opening exchanges as the youthful and relatively inexperienced Renvyle lads struggled to come to terms with the magnitude of the occasion.  Their opponents in contrast are well used to playing finals in recent years, and it showed early on as they opened up a two point lead by the quarter hour mark.  Midfielder Máirtín Seoighe was dominant in the high fielding stakes and he was ably assisted by a very lively half back line that attacked at every opportunity.  Wily and experienced, wing forward  Aodan O’Conceannain was also very much to the fore during this period of the match.  Renvyle, in contrast, despite enjoying wind advantage, were struggling to find any kind of rhythm of cohesion within their ranks.  County Minor Tommy Walsh lined out as a target man at full forward but was being well marshalled by Aran’s impressive full back Aodan O’Cleirigh.

After missing two earlier close range frees, Walsh finally found the target from a placed ball on 17 minutes, and suddenly his comrades awoke from their slumber.  Quickfire points from the hardworking and industrious Patrick Folan and their midfielder Gary Mortimer allied to a second converted free by Tommy Walsh saw Renvyle lead by double scores on 25 minutes, and although Aran full forward Paraic O’Flaithearta responded with a fine long range effort of his own,, the momentum was temporarily with Renvyle.  Key factors in the turnaround were the workrate, vision and unselfishness of wing forward Conor Conneely, the growing influence of midfielders Michael Aspell and Enda Walsh and the leadership of Renvyle captain, Stephen Heanue.  The latter really stamped his authority on proceedings in the run to the interval with two outstanding long range efforts which had class written all over them.  They also ensured that Renvyle enjoyed a three point lead going into the break on a scoreline of 0-6 to 0-3.

Aran were first out of the blocks with a superb point on the run by Máirtín Seoighe but this was quickly cancelled out by an equally impressive effort from Stephen Heanue after great approach play involving Gerry Salmon, Patrick Folan and Michael Aspell.  Two minutes later, Aran’s third midfielder Eoin Poil converted his second free and once again the margin was down to two points.  Renvyle’s response was immediate and emphatic, a wonderful move the length of the field culminating in a clinically executed goal by lethal corner forward Eoin O’Neill who was Renvyle’s star performer on the day.  It was a real turning point and as a shell-shocked Aran tried to pick up the pieces, their opponents went for the jugular in an effort to close out the match.  Midfielder Enda Walsh extended their lead to six points on 43 minutes before brother Tommy, now operating much more effectively at centre half forward set up Patrick Folan for his second point as the game entered its final quarter.

Padraic O’Flaithearta’s response on 46 minutes left the score at 1-9 to 0-6, but two minutes later it appeared to be curtains for his side after a super delivery from Tommy Walsh put substitute Alan Heanue clean through on goal.   His well struck effort was superbly repelled by Uinseann Mac Carthaigh however and the Aran keeper’s gesture of defiance had the effect of galvanising his teammates into a higher gear.  Aonghus O’hAlmhain and Eoin O’Neill exchanged wonderful points from acute angles as did Tommy Walsh and Eoin Póil from placed balls and with eight minutes remaining,  Renvyle still enjoyed a six point advantage.

Cracks were beginning to appear however as Aran threw caution to the wind in a desperate attempt to restore parity.  Defensive indiscipline on Renvyle’s part lads was ruthlessly punished by the superb freetaking of Eoghan Póil who fired over three massive efforts to leave just a kick of the ball in it.  As the game entered its final minute, Adam O’Cleirigh took the final pass of a flowing movement and bore down on the Renvyle goal with only one thing in his head.  However, just as he pulled the trigger, Renvyle’s Aidan Flaherty executed a magnificent block and the danger was averted.  Aidan’s timely intervention finally broke Aran’s spirit and re-ignited his own charges who closed out the game superbly in injury time with two further points from Enda Walsh and Eoin O’Neill.

This is the fourth time in the club’s history that Renvyle have captured a Junior A  League title within the existing  twenty four year West Board competitive structures.  In  1984, they defeated An Cheathrú Rua by 2-5 to 1-7, Salthill in 1988 by 2-7 to 1-8 and Michael Breathnachs in 1997 by 1-11 to 0-5.  A successful Renvyle motion at the 1995 County Convention ensured that County Junior Final league winners would earn promotion to the Intermediate ranks but unlike Carna-Caiseal in 1996 against Corofin, Renvyle failed to take advantage of their own motion one year later when St. Grellans, Ballinasloe proved too strong in the County Final at Moycullen.  Present manager Thady Salmon, who played in the successful team of 1984, was a selector that day and he will be hoping for a much different outcome this time round against either Caherlistrane, Annaghdown or Tuam Stars.  Renvyle played at Intermediate level from 1979 to 1983 and came very close to going Senior in 1981.  It was a golden era for the club and twenty five years on there’s an overwhelming sense of optimism and anticipation throughout the parish that Renvyle football is set to rise again.