Inspired by the dominance of their powerful midfield pairing of Michael Aspell and Shane Young and the individual brilliance of comer forward Tommy Heanue, Renvyle captured the 1999 County Under-14 Division 3 League title in Headford on Friday evening last. Played in ideal weather and on an immaculate playing surface, this final was a pulsating and fiercely contested affair with many fine passages of play and high quality scores. 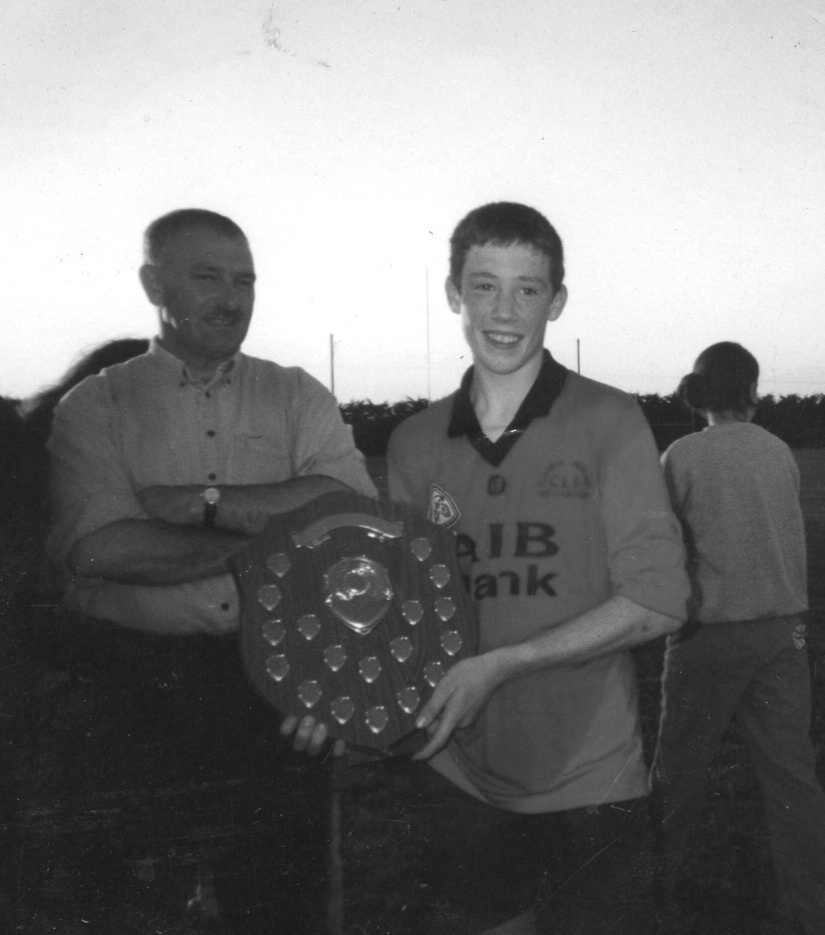 Renvyle U14 Captain Michael Aspell pictured with the Victory Shield after his side’s historic victory over Menlough.
Standing alongside Michael is Joint Manager Tommy Kane.
Photo courtesy of Eilish O’Neill.

Robert Hughes opened the scoring for Menlough after seven minutes but two quick points from Tommy Heanue edged Renvyle ahead and this lead was extended on thirteen minutes when Menlough corner back Barry Laheen failed to hold a high centre from Michael Aspell and the ball ended up in the net. Two further frees from Robert Hughes cut  into the Renvyle lead. He exchanged points with Tommy Heanue before Renvyle’s second goal arrived on 20 minutes. Again it was Tommy Heanue, whose perceptive pass put Luke Fawkes through on goal and he made no mistake from  close range. A Michael Aspell free then put Renvyle six points ahead as they enjoyed their most dominant spell of the match.  Worse was to follow for Menlough when Tommy Heanue, having received an intelligent crossfield pass from Michael Aspell, left three defenders in his wake before crashing a spectacular shot into the top corner. Renvyle now led by 3-4 to 0-4 with half-time fast approaching and Menlough looked dead and buried. Left half forward Mark Costello had other ideas, however. His brilliant individual goal after a great forty yard solo run spurred on his team and two further points from play from Barry Laheen and James Murphy left the half time score, Renvyle 3-4 Menlough 1 -6.

Although Menlough struggled to gain possession at midfield, their forwards all had the beating of their men in that first half but failed to make their dominance count on the scoreboard. They weren’t given the same latitude by the Renvyle backs in the second half however with Niall Coyne and Alan Heanue in particular, stepping up their performance levels considerably. Menlough made the perfect start to the second half when Robert Hughes converted a penalty after Mark Costello had been upended in the square by the Renvyle goalkeeper Patrick O’Toole. Menlough went on to dominate the early part of the half but spurned several scoring opportunities. Disaster then struck on 42 minutes when full back Brendan Costello, Menlough’s outstanding player all through, dropped a speculative high shot by Luke Fawkes and Stephen Heanue took full advantage by finding the back of the net.  Mark Costello’s second goal brought Menlough back into contention only for Renvyle to respond with the best score of the match; a brilliant passage of play involving Shane Young, Stephen Heanue and Tommy Heanue culminating in Heanue’s third goal.

Leading by 6-4 to 3-6 as the game entered its final quarter Renvyle were now well and truly in the ascendancy but to their great credit, Menlough rallied once more, and inspired by their captain, Brendan Costello, now operating at midfield they fought back tenaciously and dominated the rest of the match. Points from James Murphy and Robert Hughes seemed to be too little too late but Mark Costello’s third goal with three minutes to go ensured that the final few moments would be nail biting and tension filled. Renvyle responded but Tommy Heanue and Shane Young both missed gilt-edged chances to make the game safe for their team. The final drama to an absorbing encounter was a twenty-one yard free to Menlough. Robert Hughes took it short to Liam Lawless but his goal effort flew high and wide and with it Menlough’s last chance to snatch victory from the jaws of defeat. When the final whistle sounded, there were joyous scenes as the large Renvyle following rushed onto the field to acclaim their heroes, the first Renvyle Under-14 team ever to win a county title.