Lavelle The Hero As Renvyle Claim West Board U-21 Title

Before a large crowd Renvyle won their first West Board Championship in any grade when they overcame a gallant Renmore side in the U-21 B final on Sunday last.  The Connemara men have lost several Junior finals over the last two decades but this win wiped away many bad memories, as their U-21s put an end to any talk about hoodoos in the finals.  After overnight rain the ground was greasy enough and coupled with a strong crossfield wind made conditions difficult. Renmore settled first and opened the scoring with a point by Brendan Healy.  Renvyle replied with a pointed free from Francis Lavelle. However, with Gearoid Leen (in particular) and Johnny Naughton prominent at midfield, the city team had the game’s first goal through full-forward Healy, followed in the 14th minute by a point from Leen.  Eoin Noone pointed a free to stretch Renmore’s lead after 17 minutes, but with their wing backs, Kenneth Wallace and James Kane both prominent, Renvyle steadied themselves helped by a switch which saw Barry John Conneely go to centre forward.  Both Gerry Gannon and Francis Lavelle hit the woodwork with attempts at points but Lavelle’s effort rebounded to corner forward James Kane who promptly returned it to the net. This was followed by a pointed free by Noone for Renmore  which left the half time score Renmore 1-4, Renvyle 1-1. 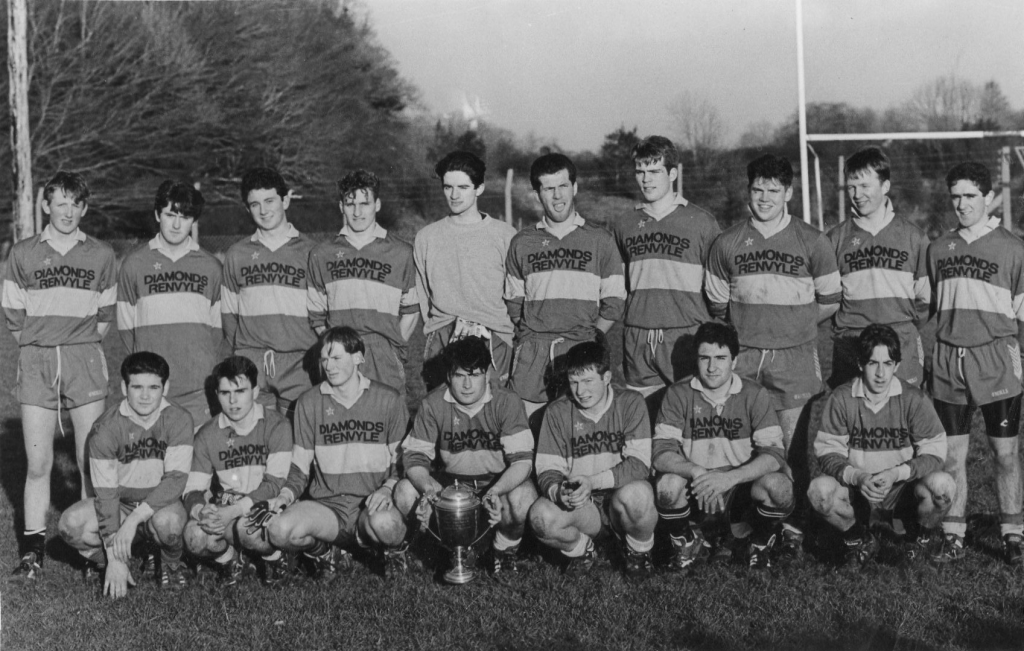 The teams resumed with Kevin Kane in at corner back for Renvyle.  Noone atoned in part for a penalty miss with a point early in the half. Soon afterwards, a Healy point left Renmore five points up and in a strong position.  The Renvyle lads then upped their performance however and the commitment they had shown in their two matches against Clifden in the semi-final reappeared. Kenneth Wallace, Francis Lavelle and Johnny Salmon combined to put the team captain John Mc Greal in the clear and he crossed the ball to the Renmore net in the sixth minute of the half.  This score was to totally transform the match, and with their half backs now completely on top, and Gannon and Niall O’Neill gaining the upper hand at midfield, the West Connemara men needed someone to transfer possession into scores and the man to answer the call was Inisbofin’s Francis Lavelle.

In an inspired spell between the 8th and 13th minutes, Lavelle shot three points from play, the last of these to leave Renvyle ahead by 2-4 to 1-6 for the first time in the match.  Renmore however were not out of it and Johnny Naughton levelled midway through the half to leave it all to play for in a hectic last quarter.  Both sides had chances but it was Gerry Gannon, a member of the Galway U-21 panel this year, who gave Renvyle the lead with a really tremendous score from play from fully forty yards out.  Jason Walsh then affected a couple of vital interceptions in the Renvyle defence as they continued to pressurise the city defence and two points from Mc Greal in the closing quarter secured the title for Renvyle.

Renvyle had many heroes on the day, Kenneth Wallace being outstanding all through at wing back, while on the other flank James Kane, Letterfrack, also put in a great performance. The other backs were all solid and Jim O’Neill in goal dealt competently with anything that came his way.  There was a great battle at midfield with all four having their moments, but O’Neill and Gannon eventually wore down Leen and Naughton.   In the Renvyle attack Barry John Conneely worked very hard all through, while John McGreal had a thundering second half.  Johnny Salmon’s use of possession was very good, Liam Laffey battled away all through while James Kane (Rosroe) took the goal chance very well indeed.

However it was the island man Francis Lavelle who stood out for Renvyle.  The former St Mary’s star scored four points and looked dangerous every time he won possession.  For Renmore, who contributed handsomely to a well contested but clean game, Brian Howley, David Kennedy, Eoin Keane, Johnny Naughton, Gearoid Leen (their best player), Cathal Jordan, Brendan Healy and Eoin Noone were best.