Without football it is unlikely that I would be an Irish speaker. I was not raised with Irish in Renvyle, I had fine teachers all through school who gave me the foundation of the language, but were it not for football  it is unlikely that I would be a speaking the language daily to daughters, friends, neighbours and many more.  This is one of my earliest memories; Sunday evening, our home as usual is a hullabaloo of noisy children. I look out the window and see my father sitting alone in the car. He is not coming or going, the car is not started; he is just sitting, looking ahead; like a man thinking, or listening. I feel anxious: why is my daddy staying by himself outside? 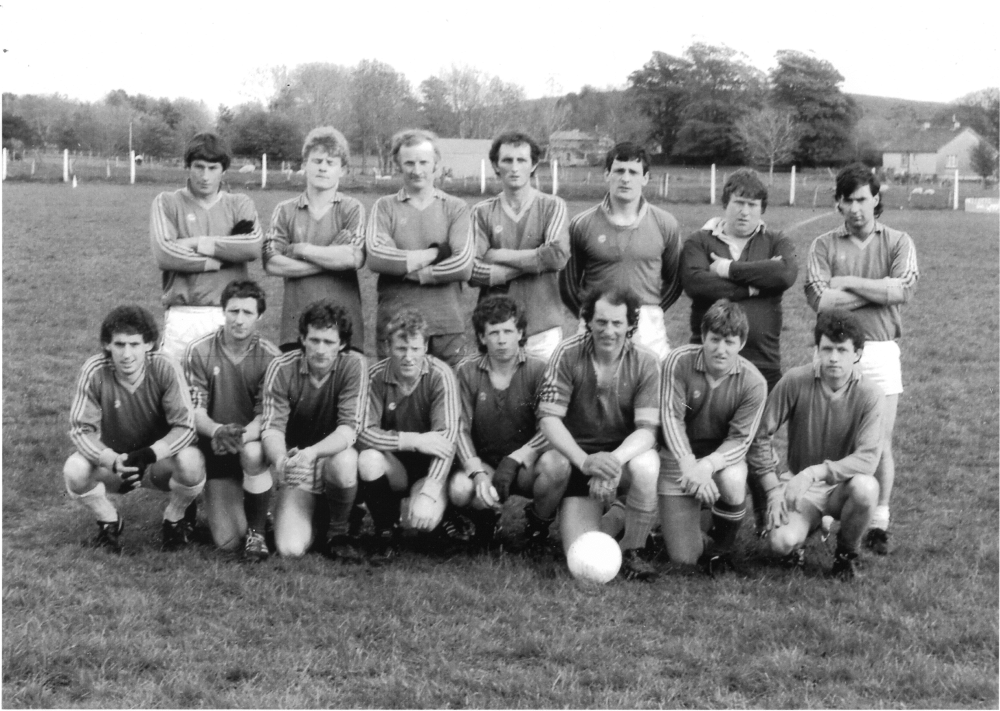 But at some point I found out that my father was listening to the sports results on Raidio na Gaeltachta, especially to the results from the West. They were on every Sunday evening at seven pm and they still are. When he came in, I would hear him saying that Renvyle beat Breathnachs, or that Clifden lost to Carna and so on. He needed to find a quiet place to listen carefully to Micheál Mac Donncha of An Cheathrú Rua giving out the results in rapid, crisp Gaelic, which my father understood although he does not speak fluently.  I did not know it at the time but those Sunday evenings nurtured affection for the language within me; the language had a meaning and a role, even though it was outside of our home. And my father valued the language.

I heard my first ever native speaker on the Renvyle football pitch at Tullycross (or Goirtín Chloch to use its old townland name). That was Paddy Fitpatrick, or Paddy Mick of Cashleen, whose mother Molly came from An Aird in Carna.  ‘Togha na bhfear’ and ‘grá mo chroí thú’ were his trademark calls at games and at training;  praising a score or a catch, encouraging the backs most of all because that’s where his heart lies.  I remember a midge filled, damp evening down on the field; Paddy and his brother Johnny and a small gang of men draining a corner of the field with spades;  a Sisyphean task because the whole field was a swamp. But that didn’t discourage them. The talk was lively and although it was in English I noted the Gaelic word in Johnny’s speech , ‘Faraoir’ – alas! A fine, poetic, musical word, its English equivalent evocative of Shakespeare. This was meat and drink to the ear and imagination of a young lad who had little to say but was listening always.

All the Conamara Gaeltacht teams came to Renvyle. The black and yellow jerseys of Carna Caiseal, the maroon and green of Na Piarsaigh, the white and blue of Micheal Breathnach from Cois Fharraige, the black and red of An Cheathrú Rua, the black and yellow of Naomh Eanna Leitir Móir.  Irish filled the air on those days; praises and condemnations, jokes and curses. It seemed to me that this music travelled as far as the Bens that can be seen from the field and echoed back again to me.  I can hear it again now as I write this in a far flung place –   ‘ar a chois!’ (on his foot), ‘coinnigh ort!’ (keep going),, ‘maith an fhear a Mháirtín!’ (good man Máirtín), ‘grá mo chroí thú! (love of my heart).’, ‘Ahhh… praiseach, a leaids!’(Ahhh rubbish lads!). I recall a young, slight corner forward from Cois Fharraige spending the whole first half of the game calling for ball into his corner near the top goal. ‘Oh hooo aah – oh hooo aah!’ time after time he called. I was entranced by the word, which sounded like a high pitched owl’s call. I couldn’t make sense of it and yet it sounded familiar. Eventually it came to me – ‘ó thuaidh! ó thuaidh!’  ‘North! – North!’  The simple sophistication of the Gaelic language came home to me;  how much more precise, musical and beautiful the term ‘North!’ to describe his global positioning on the field than our English versions ‘up here!’, ‘in here!’, or ‘over here!’

The first time I played against a Gaeltacht team was in an U14 tournament organised by Brian Courcey, a Cleggan man who was stationed as a guard in Ahascaragh in East Galway. Ahascaragh, Clifden, Renvyle and Na Piarsaigh (Ros Muc) took part. It was played on a misty wet day on a small pitch beside Rusheenduff lake in the grounds of Renvyle House Hotel. We lost to Na Piarsaigh . I understood little of the Irish I heard on the wind that day but I recall the half English- half Irish cry of “pusháilimíd an van’ and a dozen youngsters putting their shoulder to the mini-bus which has sunk in the mud. They had Irish that I was not learning in Tully National School.

Remembered and written by Michael Gannon.

Michael Gannon is a native of the townland of Derryherbert, on the Renvyle Peninsula, in the Parish of Letterfrack-Ballinakill.