A Lifetime Of Service

I stayed involved at management level throughout most of the seventies and apart from the football there were some great times socially. In the earlier part of the decade, Johnny Fitzpatrick used to bring a lot of us to the matches in his new van which he had purchased shortly after his arrival home from America. Charlie O Malley would always bring the accordion and the other regulars who come to mind are Patsy Coyne, the shoemaker from Letterfrack, John Walsh, the blacksmith from Ardnagreevagh, Katie Conneely, Johnny Jack Wallace and John Joe Coyne. We had great sing songs, music sessions and dancing in Burkes of Clonbur and other such places, and with our chauffeur being a non drinker all his life, we were all in very safe hands. Sunday was very much the day for socialising and consuming a few drinks back then but as far as the footballers were concerned that was the extent of it. Come Tuesday, lads would be back training and looking forward to the next match. It was  all a far cry from the culture of binge drinking which presently afflicts so many of our promising young adult players. The annual Dinner Dances in Renvyle House Hotel were hugely enjoyable affairs and the 1973 one in particular really stands out in my memory because we teamed up with the newly formed Connemara Rugby Club and it was an outstanding success. The mid seventies also heralded the eagerly anticipated annual visits of the Treaty Gaels and John Mitchells clubs, both of whom had so many of our parish footballers in their ranks. 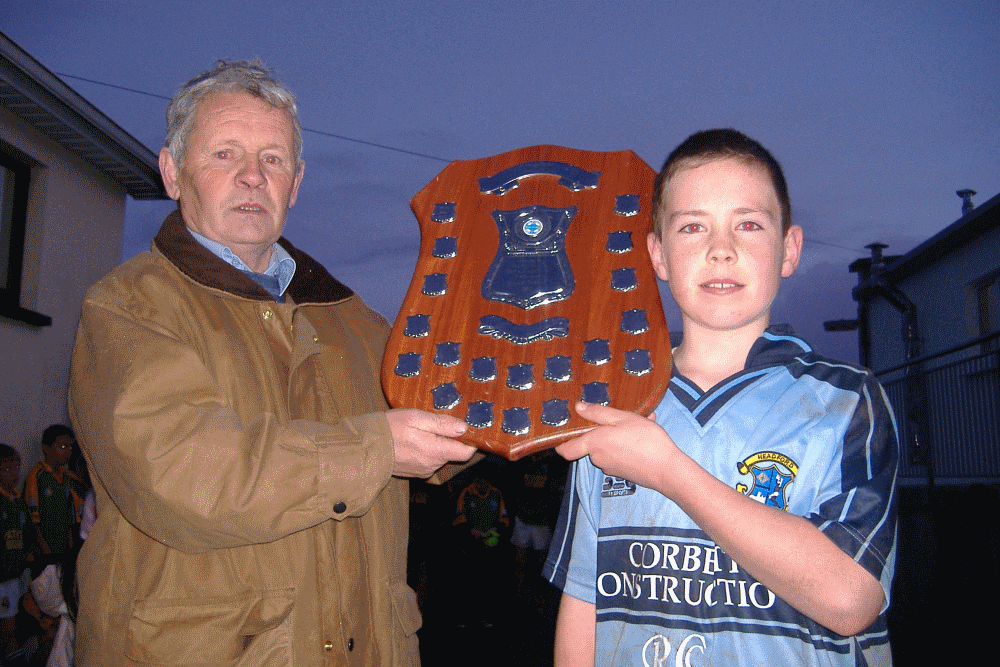 Willie Gannon presents the Stephen Gannon Memorial Shield to Headford Captain Rory Corbett after his side defeated Renvyle after extra time in the 2006 County U-12 Division 3 final at Tullycross.

The Mitchells used to play matches in Mayo and Sligo as well as in Connemara and I travelled with them a number of times, with one particular weekend in Belmullet being the highlight. They were always inviting us over, so in 1978 I persuaded the Club Executive to take them up on their offer. They entrusted me with the organising of the trip and I managed to put together an overall package which came in at £33 a head. Stephen Thomas Kane was my liaison contact over yonder and he had a very full social and sporting itinerary laid on for us upon our Good Friday lunchtime arrival. We played a Mitchells selection on the old Ruislip pitch later that day before retiring to Packie Grealish’s pub in Willesdon later that night for some much needed refreshments and a bit of banter. The following day a big gang headed to Highbury to watch Arsenal play West Bromwich Albion in an English League Division One clash. There was huge Irish interest at the time in the exploits of Brady, O Leary and Stapleton and not surprisingly, Renvyle GAA had a few Arsenal supporters in its ranks. I was well used to attending soccer matches over the years but it was a completely new experience for many of the Renvyle players and they enjoyed it immensely. Sunday saw a rematch between ourselves and our hosts out at New Eltham and there was a big do organised for the Monday night which was very well attended. We headed home the following day, tired and maybe a little worse for wear, but very happy and glad that we had availed of an opportunity to do something different as a club and in the process reconnect with so many of our fellow parishioners who were living in exile at that time.

The London trip had been a great success on a number of different levels but fate decreed that there would be no sequel during the eighties or the nineties. We did head for The Kingdom however in 1984 after a chance meeting between my fellow selector Joe Salmon and Kerry senior team selector Eddie Sullivan in Corofin. It was the occasion of the official opening of Corofin’s new pitch and a challenge match between Galway and Kerry was arranged to mark the occasion. Renvyle had a league match in Galway the same day and myself and Joe decided to head for Corofin afterwards. Joe and Eddie knew each other well from their New York days and the latter, who was also the proprietor of the Tatler Jack pub in Killarney invited us down for a match with the local club and a night on the town. We told him that we’d love to take him up on his offer so he made subsequently made contact with the Dr Crokes GAA Club on our behalf and they agreed to give us a challenge. I was club Chairperson at the time and myself and club secretary Thady Salmon took on the organising of the trip. We decided to coincide it with the Munster Senior Football Championship final between Cork and Kerry which was fixed for Killarney that year and Thady managed to get a good deal on the accommodation in Scott’s Hotel. What transpired was a hugely enjoyable weekend, with the wives and girlfriends in particular really knocking great rights out of the whole experience. As for the football, well there were two unexpected results. Renvyle defeated Dr Crokes on the Saturday and the following day we were all in attendance in Fitzgerald Stadium when the Tipperary U18s caused a huge shock by disposing of hot favourites Kerry in the Munster Minor Championship Final.

Remembered by Willie Gannon and written by Paul Gannon.

Willie Gannon, a native of Tully village, is a permanent resident of the townland of Derryherbert, on the Renvyle Peninsula, in the Parish of Letterfrack-Ballinakill.