There was very little between any of the junior teams in Connemara during the mid-seventies. For the most part they were all fit, physical and tough. I was young, fearless and blessed with a bit of natural speed which enabled me to motor in and around opposing defenders most of the time. I was also lucky enough to avoid any kind of serious injury. Tullycross pitch was generally reserved for matches only with the midweek training taking place on the Monks’ Field where Connemara National Park is today. Sailor’s Beach still reigned supreme on Sundays however, and I have vivid memories of gangs of lads gathering in the morning with wheelbarrows and buckets after the high Winter tides had left the playing field littered with durling stones. By the beginning of the next decade however these Sabbath sessions had gone out of fashion and I’ve often reflected that their demise was tantamount to ripping the heart and soul out of the Renvyle football experience. In 1986 after Renvyle qualified for an historic first ever West Board Junior A Championship Final against our near neighbours and fiercest rivals, Sailor’s Beach was selected as our place of preparation. Johnny Kane ran the legs off us three times a week and the practice matches were played with real purpose and intensity. An incredibly close bond developed within the squad and there was a collective sense of destiny. On a personal level, the football that Summer brought me back to where it had all began over twenty years earlier and I rediscovered the qualities and values that really matter within the whole gaelic sporting experience. 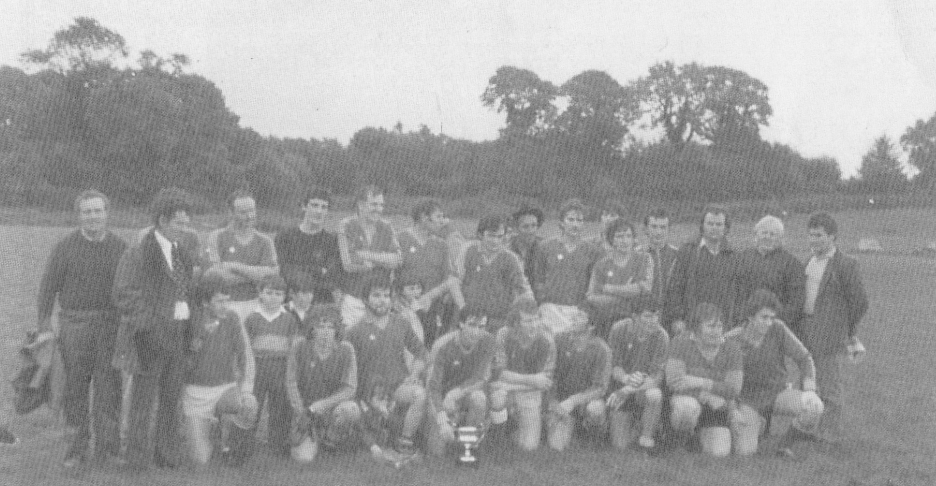 The final itself was a real nail-biter. We were very slow getting out of the blocks, didn’t play anywhere near to our full potential but stuck to the task doggedly and managed to claw ourselves back into contention. With time almost up, I was presented with a glorious chance to bring the match to a replay. We were awarded a fourteen yard free slightly to the right of the posts. I stepped  up to the plate in my customary confident fashion, elected to take the shot off my weaker left foot and then proceeded to make a real hash of it. The final whistle sounded on the resultant kick out and Naomh Feichin had won the day by 1-6 to 1-5. That costly miss was without doubt my lowest ever point within the gaelic football experience and it took me a long time to come to terms with it. It was in stark contrast to eight years previously when I slotted over the match winning point from a sweetly struck fifty in the 1978 County Division Three Championship Final against St Brendans.

In 1976, the two tier system of senior and junior that had prevailed in the county for decades was replaced by a radical new divisional structure. Renvyle and Naomh Feichin were both regraded at division two level and relegated to Division 3 at the end of that first season. The following year, the Omey-Ballindoon club took full advantage of their new status by defeating Monivea in the county championship final in Pearse Stadium. It was the kick up the backside that Renvyle probably needed  and we put in a big effort the year after. The 1978 Division 3C League decider against An Cheathrú Rua in Pearse Stadium was the club’s first first regional final in fifteen years and defensive indisipline cost us dearly on the day. We regrouped for the championship however and overcame the challenges of Claregalway and Eire Og to secure a second day out in the Stadium. We made a terrible start in the final and found ourselves trailing by 1-2 to no score after ten minutes. The whole team closed ranks superbly on the Ballygar-Newbridge lads for the remainder of the match however, denying them any further scores in the process. Our forward unit managed three points in each half, a paltry sum in itself, but still enough to give the Renvyle club its first and only ever adult county championship title and more importantly, promotion back to the ranks of intermediate football.

We acquitted ourselves really well in our first year back at the higher level and reached the Division 2C League Final against Bearna. We repeated the feat in both 1980 and 1981 only to lose out to both Leitir Moir and St Michaels. Having lost out to both St Gabriels and Kiltormer in successive Division 2 County Championship quarter finals in 1979 and 1980, no one gave us any chance of beating Corofin in Oughterard at the same stage in 1981 but we upset the formbook completely to set up a semi-final showdown with Naomh Feichin at the same venue. A huge crowd turned up to see which of the two West Connemara clubs would go within one step of attaining senior championship status. Renvyle were full of self-belief and confidence and controlled the game for long periods. We created numerous scoring chances but failed to convert too many of them and were made to pay a heavy price. Our opponents took most of their opportunities on limited possession and duly booked their ticket to Pearse Stadium for the County Final against Williamstown. That one point defeat to our fiercest rivals was very hard to take, but  little did I realise as I trudged wearily and disappointedly off the Oughterard pitch , that I would be destined to play a key role in Naomh Feichin’s one and only intermediate county title success eleven years later.

Remembered by Stephen Flaherty and Written by Paul Gannon.

Stephen Flaherty is a native of the townland of Ardnagreevagh, on the Renvyle Peninsula, in the Parish of Letterfrack-Ballinakill