The razor sharp representatives of GMIT Letterfrack hurled themselves into the history books in the heart of Mayo recently with a scintillating performance of power, passion and no little skill that left the opposition trailing in their wake and their hardy bunch of loyal supporters dreaming of a League and Championship double down in the rebel county next month.  The setting may have been bleak and the surroundings stark, but that mattered little to the Letterfrack lads, who carved out a significant milestone for themselves, their long established, highly experienced and totally dedicated management team of Paul Leamy and Sean Garvey and last but not least the parish of Letterfrack-Ballinakill itself, which has always nurtured a keen interest in and affection for the game of hurling despite the non-existence of a club entity therein.  Fate decreed that an All Ireland Final which was originally fixed for Oughterard was ultimately switched to Ballyheane which was tantamount to giving home advantage to Castlebar.  Their large and vociferous support did everything in their power to transform the performance of the troops on the front line but their exhortations were in vain.  Letterfrack had a date with destiny and not even divine intervention itself on this occasion was going to deny them their day in the sun. 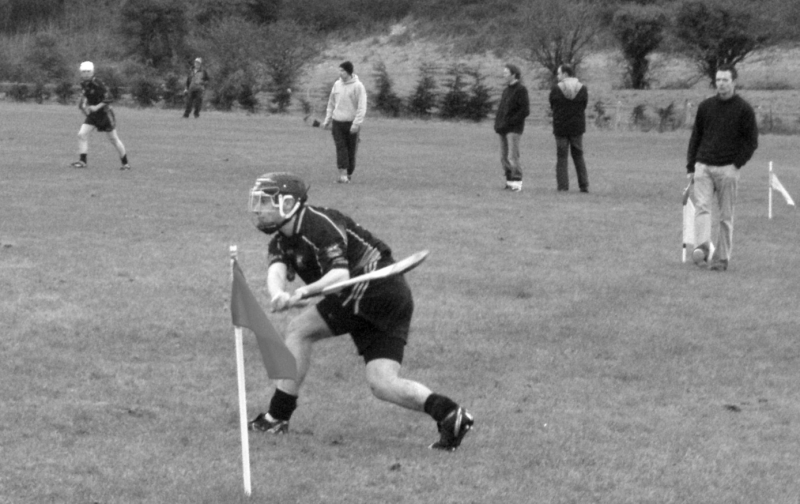 Morgan Lalor taking a side-line cut during the league final.

It was a very sporting contest all through and both sets of players are to be commended on their exceptionally high levels of fitness.  They also belied the greasy underfoot conditions with an exhibition of totally committed, disciplined and wholehearted hurling from start to finish.  Castlebar had the heart, the pride, the intensity and the hunger but ultimately couldn’t match the cuteness and artistry of their opponents.  That was the essential difference on the day.  Letterfrack had too much craft and guile and were far too well balanced all over the pitch for their gallant but ultimately limited opponents.  Once the pre-match favourites really got into the groove in the final quarter they looked like a side that should be playing in a higher grade and thankfully this will be the case in 2009 when they will move up to Division Two League and Championship (Ryan Cup).

One of the Castlebar IT corner backs endeavours to clear his lines as Letterfrack’s
Patrick Naughton moves in to put him under pressure during the 2008
Division 3 League Final.

The local significance of GMIT Letterfrack’s achievement should not be underestimated and can be appreciated on a number of different levels.  I am reliably informed that more than half a century ago hurleys were one of the many items produced in the Christian Brothers Carpentry shop in the grounds of Letterfrack CBS. It is also half a century since the official opening of the Community Sportsfield in Tullycross.  This groundbreaking initiative was the culmination of many months of hard labour by scores of men from all the various townlands in the parish.  Most of those same men now enjoy a heavenly existence but I’m fairly sure that they and the few mortals who still remain with us will have doubtless derived a fair measure of happiness and satisfaction from the knowledge that this particular bunch of Letterfrack hurlers availed of their creation for training purposes in the build up to this final and earlier matches.  I reserve the final word for the people of vision who brought about the creation of Connemara West and by extension the establishment of a Third Level Institution of some renown in the Quaker Village of Letterfrack.  They too are surely entitled to bask in the glory of this wonderful sporting achievement.