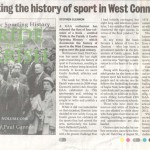 In the first of a new series of extracts from Paul Gannon’s ‘Gaelic Sporting History’, Paddy Gannon and the late John Gannon recall their early memories of GAA in West Connemara

The late John Gannon (a native of the townland of Cloonluane) shared with Paul his earliest memories of GAA, as a remarkable story of a game played on Flaherty’s Beach in the 1890s

‘My father informed me that it was a man called Joe Curley from Tullycross who first brought a proper football to Renvyle in the late 1890s. The place he ordered the ball from in Galway actually sent him on a rugby ball by mistake and this was duly returned and a round ball sent on it its place.

He organised a game on Flaherty’s beach.  The fact that there was massive interest locally can be gauged from the turnout. There were about 30 players on each side. There was no referee and no rules.  There were no posts either. One team had to work the ball in the ‘garraigainimh’ (the sandy garden) on the west side and the other team had to work it as far as a couple of sand bunkers on the east side.

It must have been a funny spectacle, the sight of sixty men all frantically chasing after the round ball with every man desperate to get a kick on it. It was no place for the fainthearted.

Generally speaking the men wore bréidíns, patched up tweed trousers, tied round the waist with a string, and báiníns, white flannel jackets without buttons which could also be tied with string. Football jerseys, togs and boots were unheard of.

These men would all have worn strong hobnail boots and if any man was without, he’d borrow a pair from somebody looking on.  Curley mustn’t have been impressed at the general mayhem he surveyed that day, because he soon wrote off for a book of rules, which eventually arrived before too long.

‘Throughout the thirties I played in many  matches for Renvyle against Letterfrack, Lettergesh, Clifden and Cleggan. I played three or four times against Cleggan back in Aughrismore.  Sometimes we got over on Curley’s lorry and, sometimes we cycled over.

‘We also played Cleggan five or six times over on Flaherty’s Beach in Renvyle. We never lost to Cleggan as far as I can remember. However, in all the times I played fifteen a side against Clifden I was never on a winning team.

‘We had footballers in Renvyle every bit as good as Clifden but they always seemed to have the more balanced team. Of course they were always able to strengthen their team with players who weren’t native to the town like guards or shop boys. We always felt that without these type of players they’d find it very hard to beat us.’

On the impact of emigration

‘Football flourished in the parish through the late 1930s and early 1940s. Renvyle, Lettergesh and Letterfrack each had a team and football rivalry was very intense at local level.

However from 1946 onwards, emigration began to take its toll and the number of young men in the parish dwindled rapidly.

We were particularly fortunate in developing a group of young footballers who succeeded in motivating themselves and were always searching for self-improvement.

There was no club structure then.

For some reason the Revnyle GAA had failed to register a team with the Galway County Board and was to remain unregistered until the latter half of the 1950s.

And on that fateful day…

‘The year was 1953.  Six of us, myself, Paul Heanue, Christy Wallace, Pete Kane, Jackie Salmon and Johnny Fitzpatrick featured on the Clifden minor team of that year which contested the county final against Headford/

Caheristrane in Oughterard on a November Sunday.

The weather conditions were atrocious, strong gale force winds, hail, sleet and snow. Amazingly, the referee, a man who had played county football for Galway in or around that time, allowed the game to go on and then proceeded to perpetrate the single greatest refereeing injustice that I have ever experienced in a lifetime of playing, administering and refereeing Gaelic football.

Playing into the rain and wind we trailed by eight points at half-time.  Twenty minutes into the second half we had levelled at eight points each. No score had as yet been registered against the elements. It was then that the referee decided to call a halt. Playing conditions, he said, justified his abandoning the game. In my opinion, it was the certainty of a Clifden win that prompted him to call a halt to a game which he should have cancelled prior to its commencement.

It still pains me greatly when I recall that fateful day in 1953.

This account of that County Final is entirely factual as I recall it. It is also very negative. It has always been my opinion that we should have been given the opportunity to play out the remaining ten minutes and live our lives in the happiness and satisfaction of a job well done. The one certainty about the match in question is that Clifden would have won it, were it not for the referee’s terrible decision to call a halt to proceedings when he did.

However one nice story did emerge from that episode. Our full-back Paddy Mannion had taken with him a little bottle, medication he told us, to counteract the freezing cold. Paddy, being extremely generous, as he still is to this day, shared his little bottle with a fellow defender at half-time. It was that fellow defender who told me that little story.

We lost the replay.  Some of our key players had returned to College and were not granted permission to leave the school for the replay.  My direct opponent on that second day was a clerical student named Michael O’Brien.  Michael was later ordained to the priesthood. He ministered in New York and continued his football career in the New York colours.’

Pride in the Parish is available from selected outlets throughout Connemara