Ross Sports 1973. The tape was at a funny angle because all twenty of us had to run diagonally across the pitch. No heats; just one chaotic run, with no prisoners being taken. Early on, most of the people to my right seemed to have an advantage but I knew I had a great chance, because I had managed to manoeuvre myself over to the side, where lane one would have been located had the lanes been marked out. The buzz was in the passing out, as I moved up the line. Opponents were symbolically chalked off ,as the massive adrenalin rush really kicked in by the half way mark. “Whatever you do, don’t slow down when you see the tape. Keep your focus on the line and go for it.” Michael O’Neill’s words of wisdom rang out in my head. In my mind’s eye I still had another ten yards to go, when I finally hit the tape, with five yards to spare over my nearest opponent.

I will always be eternally grateful to those men of purpose and vision who founded the Renvyle Athletic Club in 1973. Its subsequent life span may have been short, but its impact on the privileged few who were fortunate enough to experience it was huge and left an indelible mark on all of us, that will surely last a lifetime. Sergeant Peter Walsh, who was stationed in Letterfrack, was a native of Roscahill in East Connemara, a place with a great athletic tradition. Indeed Peter was a highly accomplished athlete in his own right, in a variety of field events. His passion for athletics was shared by Michael O’Neill, Principal Teacher in Eagles Nest NS; my local school. A gifted administrator and organiser, he was meticulous in his preparation and methodical in his approach. The other person who played a pivotal role in our training was Michael Joe Ruddy from Ardnagreevagh, a naturally gifted athlete, who was renowned for his versatility over the years in the world of track and field. 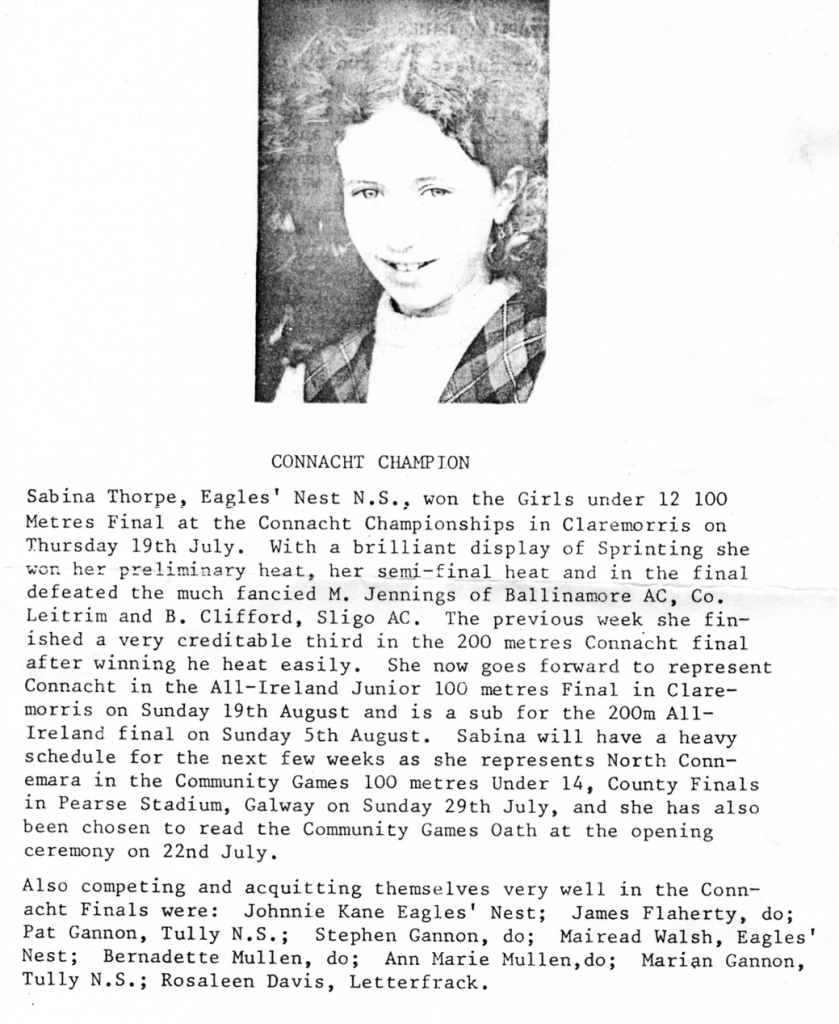 These were the men who moulded us as athletes and young citizens. Not only did they share a passion for athletics, they also had a huge interest in the development of youth generally, allied to a keen ability to spot and harness sporting ability. They were driven by a desire to create opportunities to see such potential realised, and on a personal level I will always owe them a debt of gratitude in that regard. There was never any jealousy or resentment within the ranks of the Renvyle Athletic Club because Management had the proper ethos at all times. There was always the same disposition towards all the athletes regardless of ability or social background. It was always a happy space to be in, and we were always acutely conscious of the fact that our mentors wanted us to achieve for ourselves, as distinct from a desire to satisfy somebody else. As athletes, we always appreciated that quality in them, because it took a lot of pressure off our young shoulders. Renvyle Athletic Club may not have had the physical infrastructure and financial resources of other bigger and more established clubs, but the quality of advice and tuition management team more than made up for any deficits or shortcomings therein.

Our training ground was the White Strand, and two or three times a week we pushed ourselves to the limit on the hard surface, in the belief that the sand would give us a decided competitive edge and advantage on the big day. We always ran against the clock and all our respective times were recorded. After each run, we’d be given a few moments to catch our breath and during these brief respites, management would tell us our times and encourage and cajole us into getting ourselves new targets, standards and goals subsequently. Speed was probably my greatest asset as an athlete and I got faster and faster with the continuous training, in a relentless pursuit of excellence. Despite the constantly challenging nature of these sessions, everybody looked forward to and enjoyed the training immensely. It was never condemned to be a chore and there was always a great sense of excitement and anticipation in the days leading up to the next competitive event. Management always did their homework re our potential opposition and I was always acutely aware of who to look out for, in official competition.

We were always advised to watch our diet, but healthy eating wasn’t a big public issue back then like it is today. A major factor in this was the unavailability of such a wide variety of food. I simply ate whatever was put in front of me and left it at that. Management were forever extolling the virtue of raw eggs but I never took them up on it. I settled instead for gallons of cod liver oil diluted in my orange juice every morning, before heading off for school. My mother kept reminding me of how good it was for my muscles and she also recommended that I drink large quantities of water. I was never given or allowed sweets and I never went looking for them. Out of sight, out of mind I suppose.

Claremorris was the venue for the 1973 Connacht Inter-Club Track and Field Championships and I was driven down on successive Wednesdays to run in qualifying heats for the U12 100 metres. I ran really well on both nights recording a personal best of 12.8 seconds in the process. Connacht Finals day itself was a journey into the unknown, an almost larger than life experience. Apart from the customary nerves and tension, I recall feeling like a real country bumpkin from the back of beyond ,whereas my opponents in complete contrast, appeared to be totally unfazed by proceedings. They were also really well turned out and had an air of outward confidence and arrogance about them that unnerved me a small bit.

My mentors were most likely totally tuned into the fact that I probably represented the club’s best opportunity of a medal, but they also had the good sense, not to communicate this to me in a manner that would have made me feel uncomfortable, or under increased pressure to perform. In truth, I never considered myself that great at all and it was always a revelation to me when I won a race. I can honestly say that I was totally incapable of possessing an attitude of arrogance or complacency because I always had so much respect and admiration for my opponents. On the day in question however, I remember being extremely self motivated and focussed. Management ensured that spikes were made available to me in the run up to the final, but I could never warm to them and elected to run barefoot instead. I didn’t bother with the starting blocks either, so I suppose, I was probably perceived as being in a circumstance of disadvantage, as we took positions on the starting line.

The eight lanes were all laid out professionally. Everybody aspired to being in lane one because it always seemed that bit shorter and easier. When I received my ticket indicating lane number one, I looked over towards Michael O’Neill and smiled. The omens were good.

I had a real sense of destiny on the day. I knew this was the big one and I just wanted to get into the zone as quickly as possible. “No false start, don’t look around, keep your focus on the line, pick a spot beyond it and go for it, don’t slow down until you hit that spot, and don’t get tripped up.”

Bang! The gun went and the race was over before I knew it. My only recollection is that I won it with a bit to spare so I must have got the explosive start that all sprinters dream of, on the big occasion. My initial reaction to winning was one of total disbelief and shock, as I was engulfed by mentors and clubmates alike. ‘’ This can’t be for real’’, I told myself, but the significance of my achievement sank in pretty quickly once I took my rightful place on the centre of the podium for the presentation ceremony. It was an incredibly proud moment when I bowed my head to receive my gold medal.

In the Renvyle club, there was always huge praise and celebration any time any of us got into the medals and there was always great collective pride taken in the achievement. I felt delighted in this regard, not just for myself but for the people who had clearly put an awful amount of time and effort into my athletic development despite all the obstacles and difficulties which were self evident at the time. I always thought it was extremely decent of these people to bring me all over the west of Ireland on these great sporting days out, but it is only with the passage of time and the benefit of hindsight, that I can now truly appreciate the magnitude of my personal milestone all those years ago.

Remembered by Sabina O’Flaherty and written by Paul Gannon.

Full version available in “Pride in the Parish: Volume 1”