The 1954 Mongan Cup Final which was played in Woods Field against Cleggan was an absolutely wonderful match. It was tough and hard but fair. I remember people hopping of people but at the same time, there wasn’t a dirty stroke in it. I’ll never forget the hard shoulders I got from Tom and Páidi Walsh that day. Cleggan had many fabulous footballers; Hubert and Josie DeLappe, Tom, Páidi and Stephen Walsh, Jackie and Tony Gordon, Fr. O’Malley (who was based on Inishbofin) and of course Paddy Davin from Kingstown who was a colossus at full back. There was a huge crowd there that day and the atmosphere was electric. 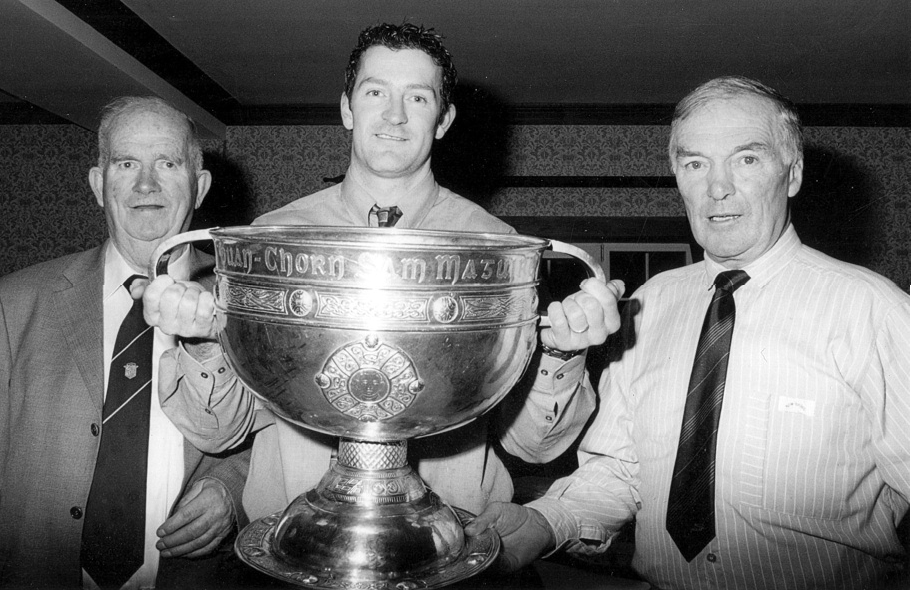 We managed to win by five or six points but didn’t seem to realise the historical significance of what we had achieved, until we actually received the cup. When Thomas Sailor Flaherty lifted it above his head, we all went into the hysterics including Brother Maher from Letterfrack CBS who had performed such an excellent marking job on Father O’Malley. A few of us went to the pictures at Letterfrack CBS that night to celebrate, and I remember Christy Wallace and myself getting cramps on both legs during the course of the film. We had cycled to and from the final, and all the physical exertion finally caught up with us in the end. I don’t recall getting a cramp ever again during the rest of my playing career.

I had a good job at the time working on the roads at Kylemore and Lough Inagh for Galway County Council along with a number of my teammates. However the desire to travel over yonder was very strong, and when Marty and Johnny Davis from Cashleen presented me with the opportunity, I was delighted to accept. They were sub- contractors based around the towns of Lemington and Warwick. I got back into football straight away by joining the St Peters Club in Lemington. It was different to playing for Renvyle because I was thrown in with a variety of different players from a number of different counties. Many of then weren’t near as good as a lot of the Renvyle lads but because they hailed from different counties they tended to be blown up as being of a much higher standard than what they actually were in reality. We were defeated in the opening round of the 1955 Warwickshire Senior Championship by the eventual winners, St Finbarrs of Coventry. They were the top team in Warwickshire at that time with a number of Offaly senior footballers in their ranks.

In September 1956, I travelled back with Marty Davis for the All Ireland Football Final. It turned out to be an incredible experience as Galway captured its first All Ireland title for eighteen years. Purcell and Stockwell were on fire that day. Purcell’s vision and passing ability was complimented superbly by Stockwell’s lethal finishing. Purcell was the best individual footballer I ever saw, an absolute genius in every aspect of gaelic football. The All Ireland final in 1956 was probably the most day he grafted hard for the team but his best ever performance in my opinion was in the 1954 Connacht Championship Semi-Final in Tuam Stadium against Mayo. It was a great privilege for me to watch “The Terrible Twins” terrorising the rebels on All Ireland final day in ‘56. It was a dream come true to stand on the terraces in Croke Park and be a witness to it all. Little did I think, as I celebrated in Barry’s Hotel that night, that I would be destined to play club football, both against them and with them, before too long.

Remembered by Petie Kane and written by Paul Gannon.
Petie Kane is a native of the townland of Ardnagreevagh, on the Renvyle Peninsula, in the Parish of Letterfrack-Ballinakill.