As the darkening clouds heralded the shadows of a Winter’s evening and the fading light brought the end of another day, the last shrill sound of the referee’s whistle re-echoed over Glendalough and Inagh Valley to announce the end of yet another Mongan Cup final. Renvyle had won the trophy for the fourth year in succession and rival players warmly shook hands in friendly gesture. Among the words of congratulations spoken to the members of the winning team by their opponents one could not help but take particular note of a remark made by his immediate opponent to Tom ‘Sailor’ Flaherty of Renvyle: “You must be the Christy Ring of football, Tom”. This remark, addressed by a relatively young player to the veteran of the Renvyle team, was indeed a fitting tribute to a man who has given long and loyal service to Renvyle and who has played in the Mongan Cup competition longer than any other player. It was typical, too, of the grand sporting spirit in which the Mongan Cup (Connemara’s Sam Maguire) has been played down through the years. 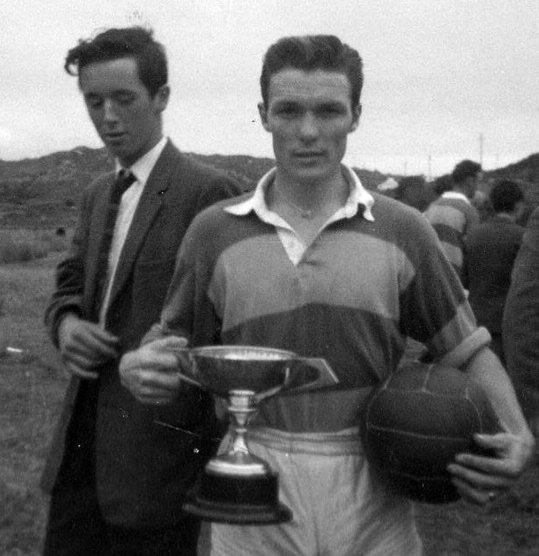 Renvyle Captain, Petie Kane, keeps a firm grip on both the Mongan Cup and the Match
Ball after Renvyle completed a three in a row at Woods in September 1962.

The Mongan Cup was presented by the late Josie Mongan, TD, of Carna, for the purpose of improving Gaelic football in Connemara. I was only a schoolboy when I first heard of the Mongan Cup and believe me the Mongan Cup is known to young Connemara boys before they hear of the “Sam Maguire”. When I was growing up there was no organised GAA club in our parish (St. Cáillíns was not founded until 1956) and the Mongan Cup did not affect us at all, except from a spectator viewpoint. It was a young spectator that I first came into contact with the Mongan Cup. The occasion was the final of the competition, which was played at the popular ‘Tank Field’ at Cleggan and I will never forget the jubilation of the Cleggan supporters when their heroes took the trophy from a very good Clifden team.

The Cup had to be filled in accordance with tradition and everybody who was at the match proceeded to Mattie O’Malley’s pub in Cleggan. The losers also went along and the Cup was filled more than once.

I remember having the privilege of partaking from the huge Cup after it had been filled especially with lemonade for the schoolboys and pioneers. The ‘sip’ form the Mongan cup was for me the start of a long association with the competition in various capacities.

Space would not permit me to refer to all the great personalities or recount some of the amusing stories and incidents which I have heard and witnessed during those years. I feel, however, that I should mention some of the people who have helped down the years to keep the flag flying and the Mongan Cup competition going. People from Clifden, Kingstown, Cleggan, Letterfrack, Renvyle, Leenane, Inishbofin, Roundstone, Ballyconneely, Cashel and Carna have maintained tremendous interest in the affairs and destination of the trophy, but no one will quibble I am sure, if I refer to certain individuals whose names have become synonymous with the competition. Reverend Stephen Ludden, CC, now in Castlebar, has served this competition well and faithfully over a long period both as a player with his native Clifden and later, while Curate at Renvyle, as Chairman of the organising committee. It was he who introduced the idea of having special medals struck for presentation to the winners. Reverend Charles O’Malley, CC, also in Castlebar, inspired such enthusiasm in football while he was Curate in Inishbofin that an island team was entered at that time for the Mongan Cup. Reverend Brother Urban, while attached to the Franscian Monastery at Clifden and now in Roundstone, took great interest in the competition and refereed many keen combats over the years. Joe King of Clifden, popularly known as Joe Packie, can truly be called the axis around which the Mongan Cup revolves. He served as Secretary of the Committee in charge for several years, until he handed over last year to the very capable and efficient Brother Oswald, of Clifden. ‘Big’ Pat McDonagh, a former county footballer, played with Carna in several Mongan cups. An active officer of the Committee, he still turns out occasionally with the team.

Garda Tadgh Sullivan, a Kerry-man in case you did not know it, was actively associated with the Mongan Cup Committee, while stationed at Roundstone, and my good friend Páid Kennelly, the wellknown former athlete has been prominently associated with the competition as player, referee and now as an administrator.

Then there is the man who has refereed all football matches in the district for many years, the Knight of the Whistle who will always say “yes” when asked to do that unenviable job, Reverend Brother Basil.

On the field of play prominent names like the Mannions, Joyces, Kings, and Collins of Clifden come to mind. Pat Davin and the Pryces of Kingstown, ‘Pom’ O’Malley and Hubert De Lappe of Cleggan have also represented their parishes with distinction. In addition to ‘Sailor’ Flaherty, Renvyle will remember with pride the names of Diamond, Wallace, Kane and Ruddy. The Ryans, Vaughans and Keanes figured prominently with Roundstone teams and, as well as ‘Big’ Pat, Carna had the Greenes, Connollys and the evergreen Josie Hynes. Many others, too numerous to mention here, have graced the playing fields while representing their parishes in the Mongan cup. The players who blazed a trail of glory in former years have always been the inspiration of the young men who follow them. Long may this inspiring tradition continue.