I remember the time they flew aeroplanes from America into England. It was in October. I was digging potatoes and all day long the aeroplanes kept passing overhead in twos and threes. We didn’t know what was happening. Later we learnt that the Americans couldn’t bring the aeroplanes in by aircraft carrier because they might have been torpedoed in the Atlantic by the German U-boats. I remember also, one really fine day, sitting down on the bank looking out to sea. Suddenly, I spied this object on the horizon. I kept watching it and how it was rising up and coming nearer. At that stage I noticed a big cable hanging out of it. It resembled a parachute because I used to see pictures of parachutes in the paper. I thought they must be landing troops on Inis Turk. My sister was home from England at the time. She came out and was a while looking at it. She identified it as a barrage balloon because she had seen them over in England. That was the time of the air-raids in London and they had put them up as a defence against the German bombers. They were anchored to the ground by three or four hundred yards of steel cable with a series of electric wires attached designed to bring down bombers if they came into contact. Three of them broke from their anchors the day of an easterly gale and were blown across the Irish Sea. Two of them came down somewhere in the midlands but one of them continued on, across Mayo and out into the Atlantic. By that time the gale had eased off and the wind had veered around north westerly and didn’t it blow the balloon in again. 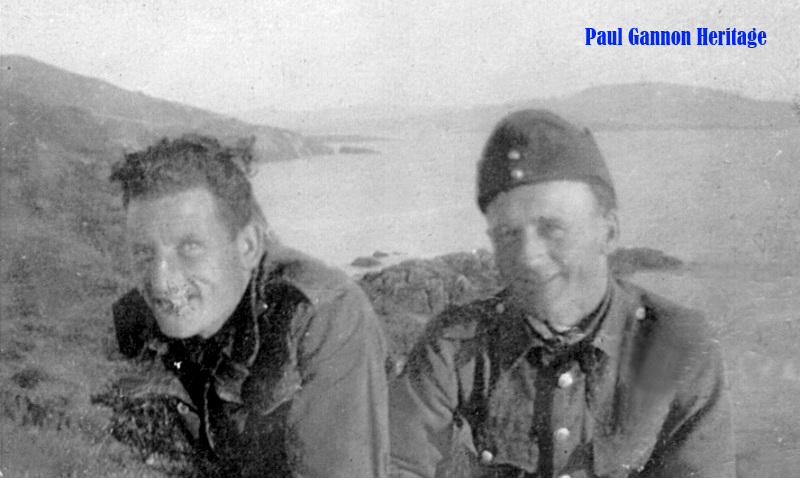 We saw it coming in across Curragh and as it was coming in, it was getting bigger, so big that it resembled a small cloud with a tail hanging out of it. It knocked all the wire, stone and sod fences in Curragh, cutting a big trench through them. There wasn’t a man or woman in Cashleen or Ardnagreevagh that wasn’t coming after it as it came over. The anchor got caught in the scelp of a rock somewhere in Ardnagreevagh and with the snatch didn’t it pull out the balloon. Well it made an all-merciful bang and the air or gas that was inside of it came out. It hit the ground and hopped like a football in on top of a small thatched cottage. It knocked the gable and chimney and broke the windows. There was a man inside the house, sitting down at the fire smoking his pipe. Stones, soot and mortar came down around him as the house shook. He ran out but where did he run but straight into the balloon. The crowd was gathering now at this time, they even came back from Letterfrack and as they arrived this man was within in the balloon and some of them were saying “That thing is mad, there’s Germans in that, stand out from it, they might be armed”. The old man emerged out through a tear in the side of the balloon. He was awful bewildered, stunned and shocked. So the people told him what happened and he said “Wasn’t it a quare place to drop it, Isn’t there plenty of room up on Gannon’s mountain?” I remember there was a lot of rope hanging out of the balloon. I got a good fair share of this rope that lasted me up to two years. Rope was very scarce during the war. As for the cable, well every man claimed whatever part of it lay on his land. They cut in up in pieces and brought it away with them. The Local Defence Force and Coastguards took over control of the balloon, otherwise the locals would have cut it up and divided it out among themselves. The guards came later and I heard the balloon was taken off to Galway. A local bard wrote a poem about the barrage balloon and these are the lines from the poem that I remember:

’Twas on the 15th November
In the afternoon,
As I was looking out to sea
I spied a barrage balloon
It quickly swept in from the sea
Across the lands of Pete Nee
And then it crossed with a might roar
Upon the house of Johnó Mór
It knocked the chimney and the gable
And completely demolished his old stable
The people they arrived from near and far
They came by bike and bus and car
The first man on the scene
Was Tom Seánín Kitty
He quickly surveyed the damage
And said it was a pity

Remembered by John Gannon and written by Paul Gannon