The Lily White From Lettergesh

The big lads practised all the time on Cloone. It wasn’t unusual for up to forty lads to turn up. You must remember there were awful big families in Lettergesh back in the thirties, not like today. Two lads would stand up and one would say “Báilim Ort” to which the other would reply, “Tuigim Leat.” Then they’d toss for the first call. Naturally enough, the man who got first call would pick whoever he considered to be the best player and they’d be calling after that until they had fifteen a side. There were often fellows waiting who wouldn’t be called at all and they’d be awful disappointed. There were some very knacky players down the north side at the time, Martin Kerrigan, Paddy Mc- Donnell, Petie Melia and Pete Walsh from Glassillaun, the Nee brothers from Culfin, Dennis, Petie and Patrick and of course Dan Coyne and Frank Kearney from Mullaghgloss. There were three teams in the parish in those days, Lettergesh, Letterfrack and Renvyle. Renvyle had some great players; Stephie Salmon, Petie Walsh, Mick Fitzpatrick, Mikey Walsh, Packy Sailor Flaherty, John Diamond, Willie Diamond and John Gannon were all county class but Lettergesh always did well against them in Cloone because Renvyle hated playing on the sand. Matches were usually refereed by Michael Lewis Connolly who lived beside the Grand Gate. The Renvyle lads used to give out about him a bit because they reckoned he used to give the benefit of the doubt to the Lettergesh lads. He was very fair, the lads down here liked him. 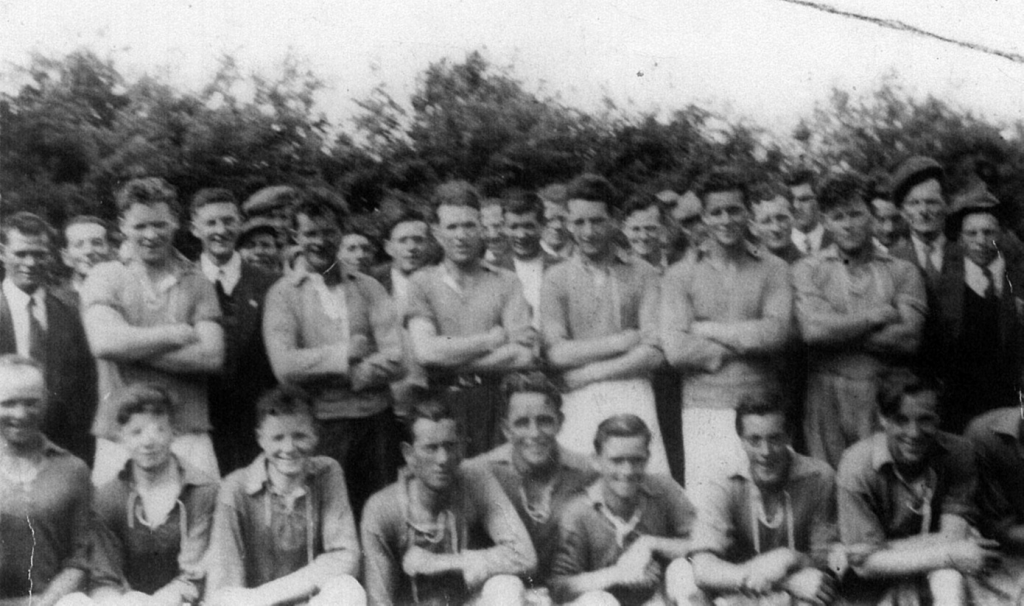 I remember travelling up to Letterfrack one day on Curley’s lorry to a match between Letterfrack and Lettergesh. It was played on a field which is part of Connemara National Park today. Letterfrack had a great full back in Paddy Nee. He was as strong as a horse, you just couldn’t get through him. Martin Conneely and Paddy Coyne were very impressive forwards for them at that time. There was also a fellow from Tuam called McGrath who was reared by the monks in the Industrial School. They later gave him the job of driving their new lorry. McGrath and Coyne were Letterfrack’s version of the ‘’Terrible Twins’’. They were both very skilful and had a great understanding of where the other would be when one of them had the ball. While the adult game was in full flow, myself, Tony Coyne and Pat Kelly took on Letterfrack’s Pearse Guy, Martin Joyce and Joe Malone in a challenge match of our own. Letterfrack won the adult match and the Lettergesh men were awful down as they headed back home on the back of the lorry. Pat Kelly was having none of it, however. “Ara, cheer up, we beat the young lads,” he piped up.

Another popular spot for matches during the thirties was Sean na gCloch behind the Nuns’ Farmhouse in Adrigoole. I remember in 1932, a few of the Lettergesh lads, including myself, travelled cross country around the back of Kylemore Mountain and down the path by the statue in order to watch a match between Renvyle and Aughris. The Omey lads had strong displays from Malachy McLaughlin and Mick King, but Renvyle were better balanced overall and emerged victorious. I only ever played against the Renvyle adult team once. It was back on Sailor’s Beach in 1939 and I was marking John Diamond, a big strong man, who was also a renowned hurler. We were no match for them on the day. The previous year Lettergesh had affiliated to the West Board as a club in its own right but I never played in any of their league or championship matches in 1938 because I had been away in Hollymount working on a farm since 1936 and very rarely came home during that time.

Remembered by Mickey Walsh and written by Paul Gannon.

Mickey Walsh is a native of the townland of Lettergesh East, in the Parish of Letterfrack-Ballinakill.