As I observed the outstanding piece of territory that unfolded before my eyes, I lamented its mislocation. “You should have been over there across the bay in Renvyle, “I sighed to myself, “instead of all the garraís and cabbage patches that we had to play in as youngsters growing up.” It was a fabulous piece of flat land, at least half a mile long by about four hundred yards wide and it ran alongside Talamh Bán beach. I’d often heard that the hares were plentiful in it and that’s why I was there that day in 1963 with my beloved greyhounds. A few days later as I was passing up by Austin O’Malley’s house, I met Phil Kane and he proceeded to describe in detail the wonderful playing field that I’d been privileged to walk upon at the foot of Mweelrea. To my surprise and bewilderment, Phil started laughing. “That’s where we played Louisburg,” he exclaimed, and as I sat in on the stone wall beside him he cast his mind back to that great event in 1913.

The match was organised by a fellow called Tom Sharkey who worked on the mail in and out of Inis Turk and the first Renvyle team ever to play a match outside the parish travelled in a pucán. They set sail from Lochán an Charraigín at Sailor’s Beach and landed at Talamh Bán at a place called Suaimire. “I was the only one who had a pair of boots,” Phil recalled. “I saw them advertised in some class of a magazine, sent away for them and they were delivered to the house to me about a week later. Cost me two shillings. There was a fair crowd of us in the boat, John Thomas Kane, Thady Salmon, Frank Kane, Martin Canavan, Austin O’Malley, Tommy Kane, Michael Lewis Connolly, Pat Flaherty, Geoffrey Heanue and a few more I can’t remember. It’s hard to keep them all in your mind.” According to Phil, the Louisburg team all arrived properly togged out and a lot of them were college lads studying for the priesthood. “Our lads were big strong men as fit as hares and the college lads were no match for us on the day. One of them was accidentally floored by Pat Flaherty and he was out as cold as a herring. Everyone gathered in around him and John Thomas Kane, being a bit of a character, saw the funny side.” “That’s the first one of them ordained anyway,” he joked, “but I don’t think it went down too well with the Mayo lads.” 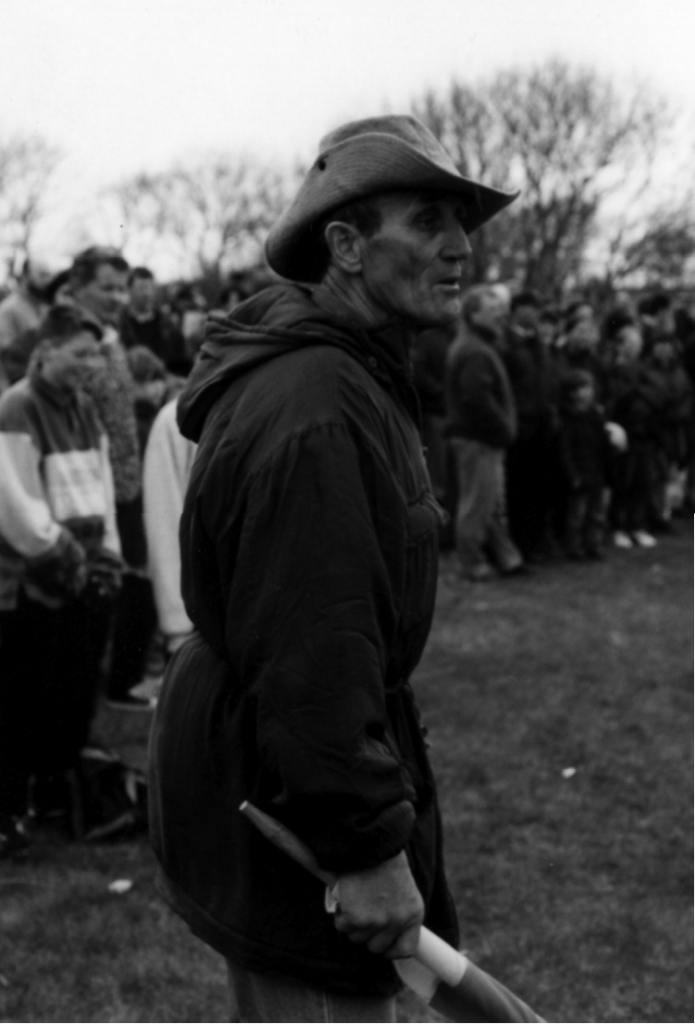 Fear An Hata! Paddy Fitz in an official capacity during a West Board League match at Tullycross. Photo courtesy of Renvyle GAA.

“Four or five currachs of Inis Turk men rowed out to Talamh Bán that day to watch the match but it blew up on Turk later that evening so they had no option but to head for Killary Harbour instead where they were able to come ashore. The islanders eventually made it back to Renvyle and the locals put them up for a couple of nights while they waited for the weather and the sea to settle.” We hit straight for Cramp Island and luckily enough were anchored back at Loch an Charraigín before the sea turned foul. Our folks were worried sick that we’d be caught up in the big swell and they were all mighty relieved to see us back on dry land, safe and sound. It was the first and last time that we travelled across a stretch of the Atlantic to play a football match.”

Remembered by Paddy Fitzpatrick and written by Paul Gannon

Paddy Fitzpatrick is a native of the townland of Cashleen, on the Renvyle Peninsula, in the Parish of Letterfrack-Ballinakill.