It was as traditional scene as one could ever wish to see. The kitchen was the heart of the house and the dance was always held in the kitchen. Whatever sparse amount of furniture there was was removed into one of the two bedrooms and planks, rested on big stones, were laid out around the perimeter of the kitchen to enable one group of dancers to take a breather while another group were out on the floor. My parents sat, one on either side of the big open fire, keeping an eye on proceedings as well as playing music. The kettle would be hanging on the crook and I often remember eels and smoked fish hanging over the fire. The cailleach was in the corner next to the fireplace but the curtain would always be drawn across it during a dance. Bags of onions would usually lie hanging from the rafters. Apart from the light of the fire, the only other light was the paraffin lamp on the wall above the fireplace. It was always my job to buy the paraffin oil and clean the globe of the lamp with newspaper. My father always reminded me to make sure there was enough paraffin oil for the night of a dance. The only picture that adorned the whitewashed stone walls was the Sacred Heart with itís little light. The fire cast shadows on the flagstone floor and the sparks would fly from the hobnailed boots as the dancers flew around the floor in a frenzy of excitement. “Mind the dresser and give the oul cailleach in the bed more porter” they’d shout as the dance would rise to fever pitch. “Up Ballaghdereen” was another favourite. 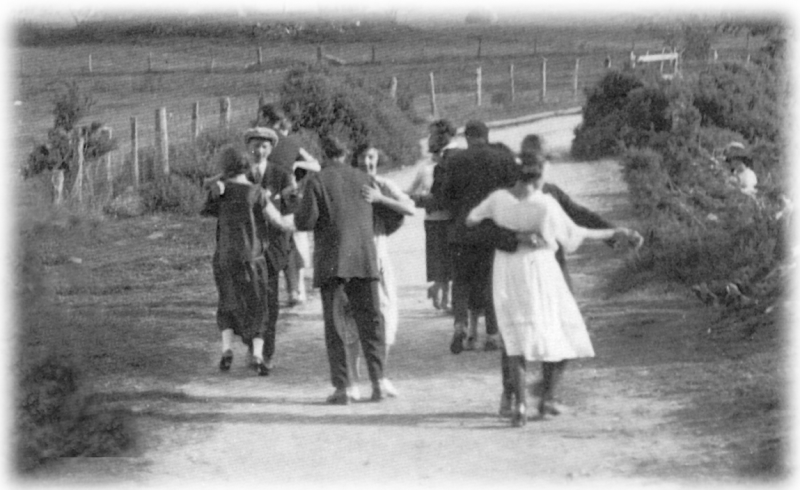 Dancing at the Crossroads

It cost sixpence to gain entry to the dance. The coats were usually thrown in one of the bedrooms but before we’d get halfway up to the room a hand would be grabbing us for a dance. The floor would be packed to capacity and there was hardly ever any time for a good long breather between dances. There was no agonising over who one would ask out for a dance; the participants were carried along in the welter of excitement. The love of dancing was the great common denominator and no girl ever refused a dance. Even the shyest of people never had a problem at the country house dances that were held in my father’s house nearly every Sunday night of the year. Everybody danced with such great gusto. They put their whole heart and soul into it and the livelier the tune, the livelier the dancers became and the more they got carried away. It was all good clean fun, just a group of boys and girls enjoying themselves under the vigilant eye of the man and the woman of the house. There was never anything out of place; everybody was always sober and well behaved. If a man did come in under the influence and started getting a bit rowdy there was always someone there to put him in his place and persuade him to leave quietly without causing any trouble. It was unheard of for girls to take a drink and there would have been no respect for any girl who did. A girl might sit on her boyfriend’s knee if the room was really crowded but there was never any misconduct and the lads were always very mannerly and often very shy in this regard. It was strictly all fun and it was very dignified.

Remembered by Teresa Bradley and written by Paul Gannon