In January the men would take the water off the land. They would clear up all the old drains. It used to take about a week. We all used to love to see the drains running again, as the land would dry up. Of course, it is all done with machines nowadays. The dung had to be cleared out of the sheds and piled into heaps. It would be needed later in the making of ridges.

I remember that in February the men and women would go to the shore to cut seaweed. They would use a sharp knife or maybe a reaping hook. I recall having to wait in the cold on a rock for my mother because there was nobody at home. This is one of my earliest childhood memories. It was February 1916 and I was seven years old. The weed that was drawn up was also used in the making of ridges. I lived on a fourteen-acre farm in Errislannan in West Connemara and farming became my life’s work, second only to my vocation to marriage and motherhood.

There was a lot of skill in the making of a ridge. In order to keep the ridge straight the man would lay out a line. A súgán was usually used as a line. The line was the edge of the ridge so to speak. Every ridge had to be four feet wide to leave enough room for the potatoes to grow and there had to be a one-and-a-half foot ditch between each ridge. The weed was laid out first by hand, to a height of two inches. When this was done four inches of stable manure would be spread over the weed with a fork. The ditch would then be split down the middle and one half turned in onto the ridge. The loose clay would then be scooped up and spread out on top. Each ridge would look like a soft bed of clay when finished.

There were two ways of putting in seed. One method was to put the seed right down on the stable manure before the ditch sod would be turned in. The other method was to finish the ridge first and then spread out the seed on top. After this the man would get a long stick with which he would bore holes into the ridge before shoving the seeds down. He would leave about ten inches between each seed. The seed was taken from the previous crop of potatoes. On every big potato there were buds which were called ‘eyes’. These were cut out leaving a good bit of potato with each. We called them splits. It was these splits that the sower put into the ridges. People said that the second method of sowing involving the long stick was preferable to the first method because the potatoes would be up about two weeks earlier. This was because the seed would not have to work its way up through the scraw and the loose clay. We used both methods. There was more work to do if you used a stick but I liked it better because the potatoes would be up quicker. 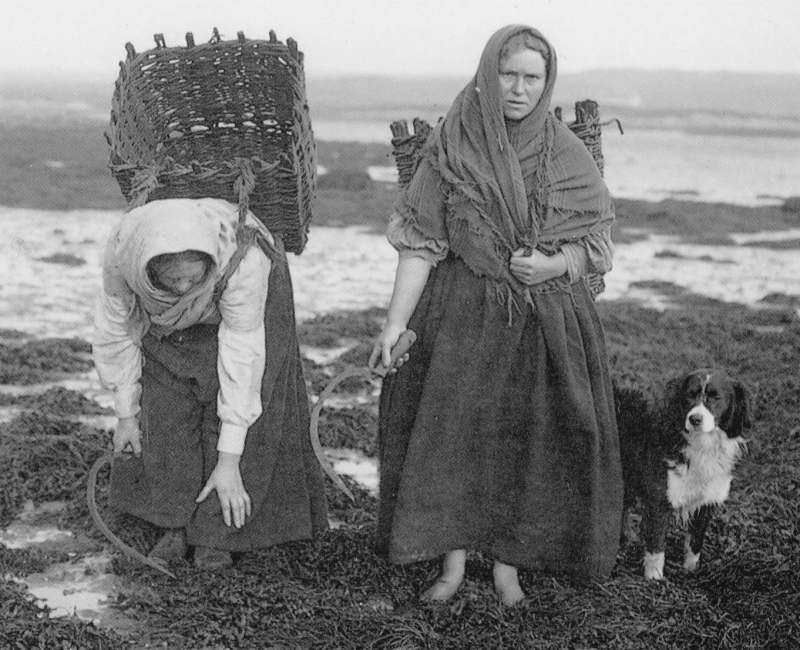 We always had the potato ridge sown by St Patrick’s Day. In May, the men would dig up the ditches again loosening the clay. They would then give all the ridges a second coat of clay in order to help the potatoes to grow more quickly. This process was known as ‘moulding the potatoes’. I remember the potatoes would put up a lovely white and pink blossom in June. People could look for new potatoes then but we did not like to use up many of them because we knew they could still get bigger if left for a few more weeks into the summer.

Remembered by Barbara Flaherty and written by Paul Gannon