The English nation prospered as never before in the 1950s and 60s. Public services there were the envy of the world. Medical and dental services were free, communications were second to none, rail travel existed in every town and village and London had its underground network. The wealthy or better-off enjoyed at least one sun holiday annually abroad. They would also be the leading owners of holiday homes in Europe at that time. Sport stadiums, soccer pavilions, greyhound and horse-racing tracks had been developed, to the acceptable standard of the times, providing ample entertainment for the pleasure seekers at home, and for the punters who gambled on the result of soccer games and greyhound and horse races on a daily basis. Yet the newspapers constantly reported a daily litany of industrial unrest and strikes. Successive governments always seemed to be loitering on the brink of collapse. 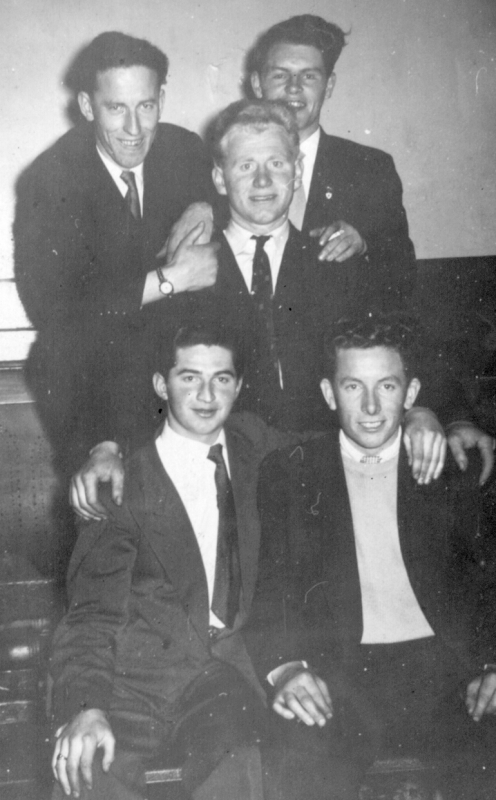 Paddy Gannon with friends in the Sharrocks Dance Hall in Manchester, 1955.

I soon began to realise that there were two faces to England, that it was a divided country. There was the official England, sluggish and rigid, and on the other hand, the human England agile and enterprising. One was the government which, in order to get anything moving, required a mountain of seemingly useless forms to be filled in. My first personal experience of this was when I applied for my first insurance card there. I was advised to write requesting that a card be issued to me. I was taught well in the art of letter writing by a man who himself loved to write, Malachy Conboy. The letter went something like this:

I received a letter back requesting that I attend the office, and explain the contents of the letter. A very stern faced senior civil servant demanded an explanation. Needless to say there was a verbal blow-up.

“I do not suppose, like the rest of ye, you know your Irish insurance number,” he said,

“1217210,” I replied without batting an eyelid. Grudgingly he conceded that I might not be all that stupid after all. Filing and filling forms for tax relief and ensuring that all registered letter receipts were forwarded was an onerous task. It was a new experience for us as direct taxation had not as yet been introduced in Ireland. Tax officials also demanded verification from either the Garda or the clergy back home of claims being made by the Irish in respect of family dependants. Officialdom moved sluggishly but rigidly. They had to be satisfied at all times that their laws were not being sidestepped, or their systems beaten.

The England of the worker housed in rows upon rows of terraced houses, and in the new suburbs that were constantly springing up, I would feel without any planning permission at that time, was an enterprising and productive one. Within the cities, factories, some barely visible, others with great chimney stacks reaching into the sky produced millions of pounds worth of produce daily. I was later to work in two such factories, one in the North of England producing baked beans and fifty-six other varieties of Heinz foods and one in the Midlands producing Dunlop tyres. By that time the post war industrialisation had prompted an exodus from the country to the city, and farming was being transformed, industrialised, and becoming less labour intensive. The average English working man did not engage himself in the hard manual labour which characterised us Irish. He was nevertheless lively, agile and very productive when engaged in what one might term repetitive piecework where the objective was to achieve the financial incentives offered by the employers.

There was also the unreported second job or ‘nixers’ as they called it. The English worker, basically in rebellion against the government’s waste of their hard earned tax money, began to engage more and more in second jobbing. Plumbers, electricians, carpenters and bricklayers succeeded in beating the tax system and side-stepping the law. Selling goods and selling football pool coupons on commission was a popular sideline and a very profitable one. The back street and black economy had been launched by the Irish with the introduction of the “Subbie” system, a system which worked very effectively, but which created enormous headaches for the other half: the government. Despite the best legislative efforts of Barbara Castle, Minister for Labour, in a Labour government, the predominantly uneducated Irish workforce continued on their merry way, evading taxation and making a mockery of the laws designed to prevent it. And now we were about to see our English counterparts adapt themselves to the same system. The black economy was to become an open secret and government officials were beginning to look foolish in trying to clamp down on it. Many officials would subscribe to the notion that it was a real pillar of the economy and would undoubtedly be engaged in it themselves.

Remembered and Written by Paddy Gannon.