The main service I provided was making horseshoes and shoeing horses. The standard shoe size required a twelve-inch length. Ponies shoes were usually made from an eight-inch length and at the other end of the scale a 5 year old Clydesdale or Draught horse required a 16 inch length. Having cut the length of iron required, the next step was to hold it inside the fire with a tongs in order to redden it in the middle. It could then be turned into the horseshoe shape. The next task was to cut a track all around the shoe and countersink the nails. The average horseshoe usually took eight nails. Indeed I was always of the opinion that eight nails were enough to sink in any shoe no matter how big the horse. The final part of the job was to put on the toeclip. I shod my first ever horse in my father’s forge at the age of twelve. It was always difficult to shoe a horse that had been spoiled by its owner. The easiest horses were those that were brought in raw off the mountain before they could be spoiled in any way. It usually took half an hour to shoe a quiet horse. I was never badly injured by any horse and can only recall one occasion when I was kicked. The owner went to great lengths to inform me that the horse was quiet and that I would have no bother shoeing her on my own. He had some business to attend to and had deceived me in order to be able to attend to his business. This was the one and only time I was ever let down by a customer in this manner. I always felt a great sense of pride and satisfaction on sending both horse and owner home happy and I usually stayed a few sets of horseshoes ahead in case of a rush. My busiest day ever was a day I shod eight horses. All of those horseshoes with the exception of one set had already been made the day before. When I started off in 1930 I charged five shillings to make and put on a set of horseshoes. By 1950 the cost had gone up to twelve shillings. 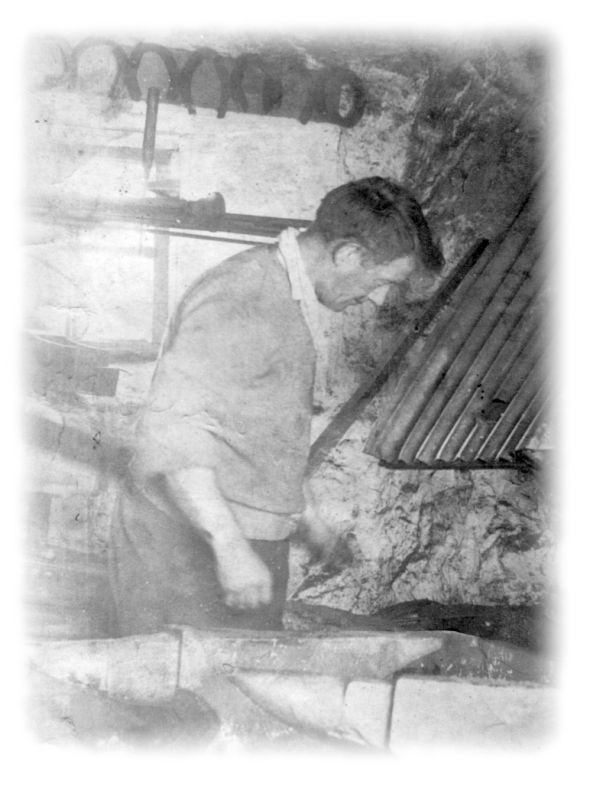 James O Malley at work in the Aillebrack Forge

My work, however, was not totally confined to the making of horseshoes and the shoeing of horses. Throughout the ’30s and ’40s I made a range of iron products. A firegrate cost from fifteen to eighteen shillings, tongs were sold for four shillings, pot hooks for two and sixpence, cranes for £4 10s, gates for £5, penknives for one shilling and spades, sleáns and scythes for a half-a-crown each. The introduction of tubular gates in the late 1940s put me out of making gates. I pointed hand drills for the County Council. There were three drills in a set, a two-foot, a three-foot, and a four-foot and I charged one shilling per point. I also made branding irons for sheep known as hornbrands, which I sold for seven shillings. This was probably one of the most technically demanding products I used to make. During the forties I made asscarts for £5 and horsecarts for £12. There were often jobs from time to time where I left it up to the customer to pay whatever he or she deemed appropriate. I suppose I was happy to help out my neighbours and didn’t want to be coming down too hard on them.

Remembered by John Walsh and written by Paul Gannon.